A new diet is likely to cause several changes in the body. One of the concerns seen in keto followers is foamy urine. A foamy appearance of urine can attribute to several reasons, regardless of the type of diet the person follows.
In this post, we try to find out whether ketosis can result in changes in the urine. We also discuss the possible reasons for foamy urine, the conditions associated with it, and the indications of a serious underlying problem to help readers understand what they should expect.

Foamy Urine on Keto? Here’s What It Means

Seeing foamy urine on a keto diet is one of the most common problems. You can see the foamy appearance of urine due to many reasons some of which are discussed here. 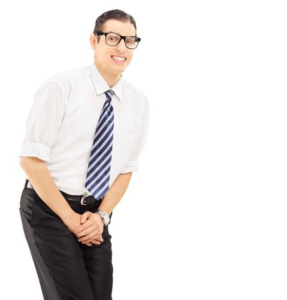 The most common reason keto followers complain of foamy urine is excessive urination. If you have recently switched to a keto diet, you are likely to urinate too frequently.
This is because the body gets rid of excess water in the initial days of a ketogenic diet as the body discards glycogen which holds much water. This means you urinate with more speed, causing the urine to look foamy.
Another reason for increased urination is more water intake throughout the day. An increased amount of urine boosts the force with which you urinate, making it look foamy or bubbly as it passes. 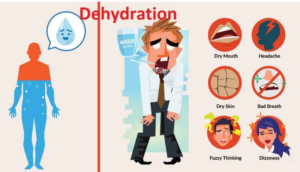 When you are on a ketogenic diet, it is common to experience dehydration due to increased urination and sweating. This is more likely during the initial weeks of the diet. Such a loss of fluid and electrolytes causes the urine to become concentrated, giving it a bubbly or foamy appearance.
A general solution to this problem is to increase fluid intake when following a keto diet. It is also important to get enough sodium, magnesium, potassium, and other electrolytes from keto-friendly foods to avoid dehydration, particularly in the starting weeks.

Another common cause of foamy urine is high levels of protein in the urine. A ketogenic diet is generally made up of 70% fat and 25% protein with a small amount of carbohydrates. However, most people following this diet increase their intake of protein to a great extent, reducing the fat in their daily diet. On such a high-protein diet, the body may break down a lot of protein in the urine, causing a foamy appearance of the fluid passed by the body.

Does Ketosis Cause Foamy Urine?

In most cases, ketosis should not be a reason for foam in the urine though some keto dieters say there is a relation between their high-fat diet and the foamy appearance of the urine. Some people claim they see foaming in the urine when increasing their intake of fat as a part of their ketogenic diet. The possible reason for this change is higher levels of ketones in the blood.

Though it is not yet determined whether the fat intake or ketones cause foamy urine, lowering the consumption of fat in the diet can help improve the condition to some extent. The increased protein breakdown in the body during the early days of a ketogenic diet is the most possible reason for changes in the amount and appearance of urine.

When you start following a ketogenic diet, the body enters into a stage of ketosis to obtain energy from ketones instead of carbohydrates on a normal diet. During the stage of adaptation, it is likely that the body converts other substances like protein to get energy. These processes often result in various changes in the body including urination. This is why you may see foamy urine in the initial days of a ketogenic diet.

Foamy Urine With No Protein? Here’s What To Do

When more than a normal amount of protein gets passed in the urine, it is natural for it to appear foamy, whether you are following a ketogenic diet or not. However, at times, it is possible to see foam in the urine in absence of protein. One of the most obvious reasons for foamy urine without protein is passing the urine at a higher rate when starting a ketogenic diet. This is common during the initial days of the diet and should get normal with time.

To treat foamy urine occurring from excessive urination, you can consider increasing your water intake accompanied by electrolytes to keep yourself hydrated. Drinking enough fluids will make sure your body does not suffer from the complications of water loss. Foamy urine can also be a result of dehydration which can be addressed by taking sufficient fluids all through the day to compensate for increased urination and sweating in the starting days of a ketogenic diet.

Another reason for foamy urine without protein presence is the appearance in the toilet from cleaning chemicals. If this is the case, you can try changing the cleaner to see if the foamy appearance goes away. In addition to these, some medications can cause changes in urine, sometimes resulting in a foamy appearance. Examples of such medicines are those used to treat urinary tract infections. The problem should resolve once you seize to take the medicine.

When To Worry About Foamy Urine On Keto?

For those on a ketogenic diet, occasional foamy urine is not a concern if not accompanied by any other health issues. However, if you suffer from any medical complications with foamy urine or see the symptoms lasting for more than a few weeks, it is advisable to consult a health practitioner.

Any symptoms like fatigue, nausea, vomiting, swelling or appetite loss indicate a more serious medical condition that should be addressed at the earliest.

Foamy urine can sometimes be a result of other health problems including kidney disease, diabetes, hypertension or any other autoimmune disease. At times, long-term high blood pressure causes damage to the kidney, affecting its ability to deal with protein and waste material.

To find out whether foamy urine is a symptom of kidney problems or high blood pressure, it is a good idea to get a urine examination that tests the levels of protein, blood, and glucose in the urine. Any underlying condition causing this problem should be treated in a timely manner to avoid any further complications.

Here are some photographs of the foamy urine you can expect to see while just getting started with the keto diet. 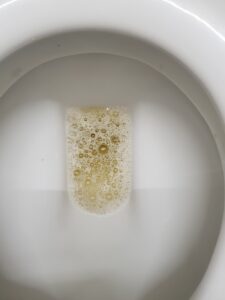 Become A Health And Wealth Coach