What Your Hair Says About Your Health[6 Key points]

Brittle hair is quite common. This is when your hair looks weak, split-ended, and dry. You’ll notice a second after gazing into the mirror.

While you may think it just needs a quick brush, this could actually be a sign that you are suffering from Cushing’s syndrome. Cushing’s syndrome is a condition where your body makes too much cortisol. Sometimes called the “stress hormone”, cortisol helps your body respond to stress. Cortisol also helps maintain your blood pressure. Symptoms of Cushing’s syndrome include easy bruising, weight gain, a much rounder face, and increased fat around your neck. If you are experiencing these symptoms while noticing a change in your hair, it might be time to see a doctor. Cushing’s can lead to health issues like heart attack and stroke. It can also bring on blood clots in your legs and lungs. If your blood pressure is insanely high, this may also be a sign of the condition. Although, there are countless other causes behind skyrocketing blood pressure. If I’ve worried you, just keep in mind that Cushing’s syndrome is actually quite rare. That being said, diagnosing the disease is actually quite difficult.

Was there ever a weird way you discovered that you were losing your hair? Sound off in the comment section and start a conversation with me.

Your diet plays an important role and protein is very important not only to have good and strong hair but it also helps in building muscles and losing weight.

Sudden hair loss could be a sign that you aren’t getting enough protein. While the amount of protein you need varies based on several factors, it is suggested you eat a healthy amount each day. For most adults, this is suggested to be around 1 gram of protein for every pound. Protein helps create your body’s hormones. It also works to strengthen your muscles and bones. Protein will provide your body with the necessary energy in order to function. But when it comes to your hair, protein is essential to its growth. Hair loss is directly linked to a lack of protein.

When you aren’t getting enough protein out of your diet, you might notice some thinning up top. Your hair can also lose color. Hair follicles are basically made up of protein. When your follicles are lacking in it, they will start falling out. If you feel like your protein intake has been lagging a little, it’s time to change up your diet. Sources of protein include eggs, chicken, beans, nuts, and Greek yogurt. 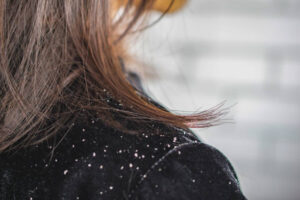 It’s pretty straightforward, Those white and yellow flakes in your hair… That’s dandruff! For those who don’t know what this is, be thankful you don’t have to deal with it. Actually, maybe you do and you just don’t realize. It’s been suggested that 1 in every 5 people have some form of dandruff. No, it’s not very serious. It’s just plain gross. This is why dandruff is considered a joke to many. You can’t help but laugh when a character on TV scratches their head, and little flakes fall out.

Dandruff is a common condition in which the skin on your scalp begins detaching in flakes. As I said, it doesn’t indicate a serious health condition. You just don’t want to be on a date and have them see flakes falling out of your hair. That’s an instant turn off, my friend. There could be a couple of reasons why you have it. Have you felt your skin lately? How oily is it? Oily skin often ends up becoming flaky. Dry skin that hasn’t been moisturized will likely result in dandruff. Some people may have a pre-existing skin condition like eczema. This invites dandruff also. Has it been a while since you’ve used shampoo? The quality of your hair products and how often you use them can dictate whether you’ll have dandruff or not. The easiest and most common way to treat this condition is with the right shampoo. So head out to your local supermarket and grab a new bottle. Just make sure you pay attention to the label. Your skin may be sensitive to certain chemicals. 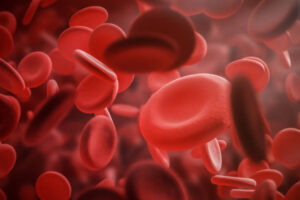 This is where things can get really scary. Sudden and unexpected hair loss can be a sign of anemia. Anemia is a condition where your body lacks the proper red blood cells due to a lack of iron. As a result, your body’s tissues won’t be getting enough oxygen. It will leave you feeling extreme fatigue as well as several other serious symptoms. You may also be noticing your hair falling out. Have you been noticing clumps in your hairbrush lately? Or how about strands of hair in the shower? If you go to the doctor with these complaints, they are probably going to administer a blood test for anemia.

Studies have shown that 80% of the world’s population may have low iron in their bodies. While there are several reasons behind this, vegetarians are particularly vulnerable. Taking meat out of your diet deprives you of the iron you need. Vegetarians who aren’t taking the right iron supplements often report a change in the appearance of their hair. Iron is essential to your health. Aside from maintaining your energy, it also keeps your immune system intact. Not to mention your gastrointestinal system. Your overall focus is generally improved by iron as well. It’s not quite clear why exactly iron deficiency leads to hair loss. Researchers have said it may be a biological or chemical reaction related to hair growth.

If you would like to get more iron through your diet, eat things like seafood, beans, red meat, and spinach.

How About That Thyroid?

Shedding your hair can very well be a sign of thyroid disease. Just to clear it up, your thyroid is the butterfly-shaped gland at the base of your neck. Its job is to make the hormones that keep your body functioning. When your thyroid makes too much thyroid hormone, your body will use up energy too quickly. This is known as hyperthyroidism, or thyroid disease.

Hyperthyroidism is said to affect 1% of women. It is less common among men. If you are suffering from this disease, chances are you’re going to see your hair thinning gradually. Thyroid disease often results in a hair condition called alopecia areata. This is an autoimmune disorder that causes sudden hair loss. What’s particular about this type of hair loss is that your head will start looking patchy. It is said to affect almost 7 million people in the U.S. alone. It is caused by the immune system going after your hair follicles. But hair loss isn’t the only thing associated with hyperthyroidism. You will probably also experience restlessness, anxiety, sweating, shaking, muscle weakness, and weight loss. 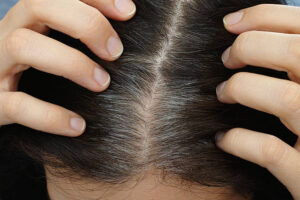 Have you noticed that your hair has been changing from dark to gray? This is a sign that you are under stress. People going through bouts of anxiety will often see changes in the appearance of their hair. Here’s how it happens. When things are rough and you’re constantly worked up, your brain chemicals mess with the cells that regenerate your hair pigment. I know, going gray is a natural part of aging.

Your hair follicles produce less color the older you get. But it’s super frustrating to watch your hair go gray prematurely. If you’ve been feeling stressed, graying hair is just another thing to be worried about. The type of stress responsible for this is known as oxidative stress. This is the imbalance of free radicals and antioxidants in the body. It leads to cell damage. On top of your graying hair, stress can also make it fall out. If your stress is bad enough that you are actually seeing these changes, it’s time to speak with a health professional.

Your mental health affects almost every aspect of your life. You can also lookup ways online to deal with your stress. Do yourself a favor and avoid alcohol. It’s also smart to eat healthier foods. This includes cutting fatty meals that cause further destruction to your brain chemicals. Practice breathing exercises as well. It’s never too late to take up meditation. Has your hair been changing lately? Are you going to look out for these signs after reading this article? Let us know in the comments below. I would love to hear from you!.

how to lose belly fat in a week [10 useful tips]